In honor of their upcoming series, The ’80s: The Decade That Made Us, Nat Geo threw out a fun idea for an 80s-inspired Throwback Thursday. Personally, I draw inspiration from both sides of the relatively polarized 80s style spectrum – punks, preppies, rude girls and boys, mods and modettes – I love it all! To a a certain degree, my ideal style is a combination of these juxtaposed elements: the overly-starched collars, power shoulders, garish brights, rips and studs. There’s a reason I’m still poaching these pieces from my mother’s closet and collecting them from thrift stores.


The ‘80s: The Decade That Made Us, a three-night event, premieres Sunday, April 14th at 8 PM ET/PT on the National Geographic Channel. 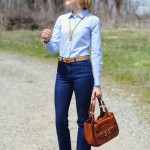 I'm pretty sure if I ever have children I will name my child Sloane because my best friend in high school made me watch that movie every day till I made her watch Empire Records every day!
And I will always look for my very own Jake Ryan but probably always end up with a Ducky or a Long Duck Dong! 😉

Oh Heathers! I just re-watched a few days ago. And then there's this from buzzfeed… http://www.buzzfeed.com/pierogienthusiast/25-heathers-quotes-retold-by-cats-9z08

Oh, Blair. Such a jerk, but it's so hard to hate on anyone who wears linen suits to high school.

I loved Blair! I love your fotos

I am old enough to have seen "Ferris Bueller" in the theater when it came out, and I would still totally wear Sloane Peterson's outfit. That leather jacket is to die.

Clogs: either you love 'em or you hate 'em. Person

As much as I miss dining out, right now my ideal d

Just dressing up for a grocery store run, as one d

Running around barefoot in the backyard until furt

Giving thanks for this soft-as-buttah blazer for g

I'm not going to lie, quarantine dressing has been

I think the thing I miss most about restaurants is

Made it out of the house and put on pants. If that

I snapped up this pretty @sezane top pre-quarantin