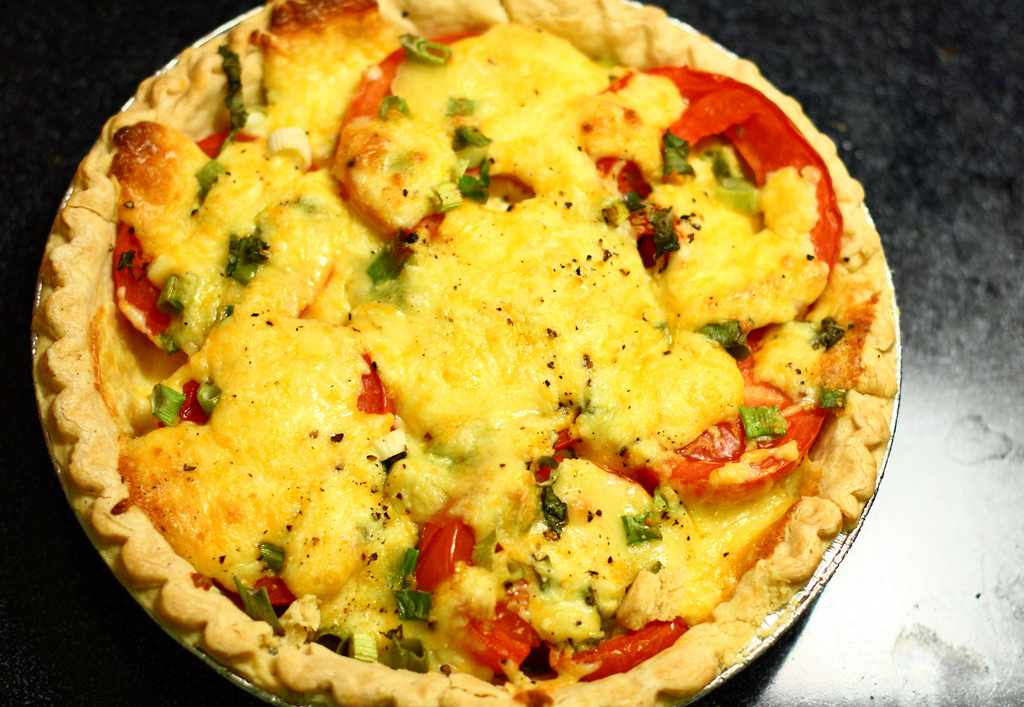 Tomato pie is one of B’s favorite things in the whole world. It is also quite possibly one of the easiest and most adaptable recipes. B and I have been getting as many fresh tomatoes as we can stand while they’re in season, so I thought I would try out Paula Deen’s recipe. I substituted sour cream for the traditional mayo, since I’m not much of a mayo fan, and used Trader Joe’s Mexican cheese blend instead of mozzarella, though I think the mozzarella would be delicious as well.

Place the tomatoes in a colander in the sink in 1 layer. Sprinkle with salt and allow to drain for at least 30 minutes (Note: Paula Deen says 10 minutes. No way. I highly recommend draining the tomatoes longer unless you want a watery mess. I drained mine for 30, but could have easily left them longer than that).

Layer the tomato slices, basil, and onion in pie shell. Season with salt and pepper. Combine the grated cheeses and sour cream together. Spread mixture on top of the tomatoes and bake for 30 minutes or until lightly browned.

To serve, cut into slices and serve warm. You can do a million things with this very simple base recipe. I’m sure gruyère, feta, or any number of cheeses would be delicious substitutes. You can switch the mayo/sour cream for yogurt, crème fraîche, or even ricotta. I’m also willing to bet changing up the fresh herbs would work out well, too. 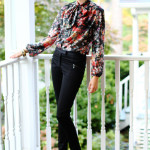 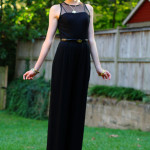 This looks really good and I love all the ingredients! x

Ruta, Look Ugly in a Photograph

Ps. Such a gorgeous blouse in your last post.

You and your delicious recipes. We recently tried the mashed potato and cabbage recipe you posted a couple of weeks ago. Too good!

These pictures just made me extremely hungry. Lol! I never knew tomato pie could look so good! 🙂

Mmmm! That looks wonderful! Thanks for sharing 🙂

this looks delish and something i will have to try:) thanks for sharing!
smiles,
gina

Delicious… I love mozarella so much! 🙂

Oh man, there's LITTLE I love more than a tomato tart. I've never tried a tomato pie! I should! I will! This recipe, even! I'll let you know how it turns out 🙂

What a hearty meal!

wow.. that looks so yummy and filling!

This looks AMAZING, E! I need to try this stat! Thanks for sharing:) Hope ure enjoying the weekend!

looks very delicious, thanks for sharing, I will try to make it 🙂

nom nom! I'm the biggest fan of tomatoes + basil and this looks amazing.

oh wow, this is making me really hungry. i'm so excited– just heard our fashion organization is field tripping to savannah & eating @ Paula Deen's restaurant is on our itinerary 🙂

I love tomato pie. A little fresh oregano tastes great. You can change up the flavors with herbs and spices

Sounds really tasty!!
We've got piles of tomatoes from the garden covering nearly every bit of viable counter space – we definitely need more recipes to use them up!

Yummy, darling!
Thanks for the recipe!

This looks delicious! I'll have to make it sometime soon!

That looks so good! I never thought about substituting sour cream for the mayo; I'm not a huge mayo fan and always feel a little ill after tomato pie! I wonder if yogurt would work too. Yummy, I just want to make this right now and curl up near a window with some wine to eat it!

Ooooooh.. this looks delicious. I'm not a fan of tomato-y things, but this could possibly change my mind.

&& I must say, I love your shoes and pants on your last post. 🙂 Both so cute!

My Republic of Fashion

That looks so delicious!! :)SarahD

thanks for sharing!!! this sounds yummy!

Thanks for the recipe dear! I'm thinking of all the possible yummy combos with this!

ooohh my mouth is watering! This looks absolutely delicious!

This looks so good and I still have your last tomato soup recipe bookmarked to make… you're killing me!!

Also I somehow think the shoes below are perfect for snozzberries…. don't know why? 🙂